In September 1919 the Newcastle Morning Herald & Miners’ Advocate (NMH) reported the recent return from active service of Matron Ida Greaves RRC.[i]  Ida received an enthusiastic welcome at Newcastle Station from a large gathering of relatives and friends.  Of all the women from the Hunter region who are known to have served as military nurses in the First World War Ida was the only one to have been in uniform throughout the War, having been appointed Matron of a field hospital in August 1914.[ii]   By the end of 1914 a handful had enlisted and seventeen more followed in 1915 but the greatest contribution by Hunter region nurses was in the later years of the war and the first years of the peace that followed, with fifty-four enlisted, at sea or on duty by September 1917.

Matron Ida Greaves and another Australian woman Nora Kathleen Fletcher who was Principal Matron of British Red Cross nurses in France were the first Australian women in the First World War to have been awarded the Royal Red Cross, an award instituted by Queen Victoria for exceptional conduct in military nursing.

Ida Greaves came from a large Newcastle family that supplied three probationary nurses to Newcastle Hospital at the turn of the twentieth century.  She graduated from Newcastle Hospital in 1904. [iii]  Nurses often moved on from their training institution once they had graduated.  There were opportunities to travel, to take up more senior positions in other hospitals or perhaps better pay and conditions in private nursing. Ida Greaves had been nursing in England when war was declared and was in the right place at the right time, at the heart of the British Empire in London.

In August 1914 Ida’s story begins not with the Australian Army Nursing Service but with the Australian Voluntary Hospital (AVH), an independent medical unit that was the brainchild of Lady Rachel Dudley, the wife of a former Governor General of Australia.[iv]  She remained interested in Australia and Australians after her return to England and kept in contact with Australians living there. In August 1914 she offered to establish a 200-bed field hospital that would go to France. It would be staffed by Australians and as far as possible funded by Australian donations.  The offer was accepted by the authorities and within a month of the outbreak of war the AVH had been formed and had arrived in northern France.

In November 1914 The Australasian Nurses’ Journal (ANJ) claimed that it was the first unit from any of Britain’s ‘Imperial Possessions’ to land in Europe.[v] By late October the hospital had found its permanent home for the duration of the War in a hotel in the small coastal town of Wimereux.  Wimereux is on the English Channel, a few miles from the port of Boulogne which became the base for the military ambulance fleet.  Convoys of hospital ships took the sick and wounded to hospitals in England once they were able to travel.[vi] 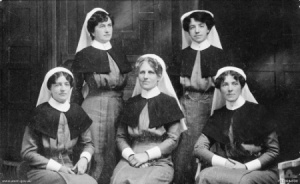 Matron Ida Greaves had her photograph taken on 27 August 1914 on the eve of embarking at Southampton for northern France as the Matron of the AVH.  She wears uniform dress, cape, starched white veil, cuffs and collar and is the very picture of a hospital matron.  The face is attractive, with strong features, the long fair hair parted in the middle and swept back over the ears in two smooth wings as was the fashion of the day.  She sits straight backed as the focus of a small group of similarly dressed women who variously sit or stand around her.[vii]   At thirty-nine years old Ida is a commanding presence, a nurse qualified to Australasian Trained Nurses’ Association standards and with ten years’ experience.

There was a considerable degree of courage involved in taking on this assignment at the time.  When Matron Greaves and her nurses embarked from Southampton in late August the German army was continuing its advance into northern France. The French and British armies were in retreat.   In the earliest days the AVH had to move on several occasions to remain safe.[viii] Subsequently the battle front consolidated into the system of more or less permanent trenches that endured largely unchanged until March 1918, and the hospital took up its permanent position at in the Hotel du Golf in Wimereux.

Hotels, casinos, stately houses and even industrial sites were taken over during the War to use as hospitals and for other military purposes.  An English nurse described the coastal town of Boulogne in October 1914 as a “seething mass of ambulances, wounded men, doctors and nurses …   all the hotels were hospitals, which gave one a horrid feeling of disaster.” [ix]

The Hotel du Golf et Cosmopolite at Wimereux was an imposing three-storey building with two side wings and a steeply pitched roof with dormer windows forming a fourth storey.  In the summer of 1914, before the outbreak of the War, it might have accommodated a hundred or more guests as a seaside retreat.  As a military hospital it had to house not only the patients but also the staff.  The nurses were assigned to bell tents at the front of the hotel.[x]  In all theatres of war nurses had to get used to whatever accommodation was available, whether tents or huts, but in the case of the AVH the discomforts were made worse by the exposed position overlooking the English Channel and its gales.  Eventually a house was requisitioned as a Nurses’ Home but one occupant noted that the walls were thin and only built for summer so it was often very cold at night.  There was a fifteen-minute walk from the hospital which could at times be “rather trying”:

Last night there was a fearful gale, and though three of us linked arms coming home at 9 o’clock, we had all we could do to keep our feet at all, and had to run when the wind blew hard.[xi]

Ida was not the only person from Newcastle at the hospital.  The commanding officer of the AVH was Lieutenant-Colonel L’Estrange Eames.  Lt-Col Eames was one of the medical officers at Newcastle Hospital and was responsible for delivering lectures on surgical procedures to nurses so would doubtless have had Ida and her sister Susie as a student at some time during her years of training.  Eames had previous experience in military medicine. He had served in the South African War.  In late 1913 he had applied for nine months leave to visit England.  In the event it turned out to be a very long nine months. [xii]  As leaders of the hospital staff Matron Greaves and Lt-Col Eames made a significant contribution to the Allied medical effort.  The AVH was highly regarded and took a leading role in advancing the understanding of war related injuries and their treatment. The hospital was the convener and host of regular professional meetings of medical personnel in the military hospitals in the Boulogne area.  An early indication of the ingenuity of the medical staff is reported in The Times in November 1914 when the AVH had been operating for some three months:

The Colonial spirit is seen in the many clever devices in use in the operating theatre … An x-ray department has been installed and the plates are exposed on a rack against the window pane during operations so that the surgeon may have the exact location of the pieces of shrapnel or the bullet always before his eyes.[xiii]

Ida Greaves remained Matron of the AVH until the hospital was handed over to the British army in 1916 and renamed No 32 British Stationary Hospital.   Ida Greaves then formally enlisted in the British service and was sent to a British General Hospital at Rouen.  The NMH  reported that she was later posted to a Casualty Clearing Station where “severe work followed this appointment, and frequently she was under fire, the nurses often being called upon to shelter the wounded and dying with their own bodies.” [xiv]  Ida was mentioned in dispatches three times and was awarded the Royal Red Cross 1st Class in June 1915.[xv]