About Great War Nurses from Newcastle & the Hunter Region

My latest book was launched on Friday 5 March by Ms Sharon Claydon MP, Federal Member for Newcastle. The book tells the story of Newcastle woman, Ida Mary Greaves, who graduated from Newcastle Hospital in 1904. After six years experience in hospital and private nursing in Australia Ida left to work in England. When Britain and its allies declared war on Germany in 1914, Ida immediately volunteered to join the Australian Voluntary Hospital (AVH), an independent military hospital established by Rachel, Lady Dudley and funded by donations from Australians. With Ida as matron and Newcastle surgeon Lieutenant Colonel William L’Estrange Eames as commanding officer, the hospital was the first unit from any of the dominions to arrive on the Western Front. In over four-and-a-half years of service in France and Belgium, Matron Greaves was awarded the Royal Red Cross and was mentioned in dispatches three times. The book can be ordered by contacting me on – sistersofthevalley@gmail.com. Cost: $30 plus $7 postage and packing within Australia.

On 1 July 1916, the first day of the Battle of the Somme, the Matron-in-Chief of the BEF noted in her diary – “intensely busy all day office, not left at all in consequence of constant demands by telephone for help everywhere.” (National Archives UK WO95/3989)

On this day there were four graduate nurses of Newcastle Hospital serving on the Western Front.

Sister Blanche Cresswick ARRC was with No 1 Australian General Hospital (AGH) at Rouen racecourse, the location of a large number of Allied base hospitals some 100 kms from the battlefield.  On 1 July the hospital had admitted just 2 patients.  As the wounded began to arrive via ambulance trains No 1 AGH admitted 527 wounded on 2 July and 452 on 3 July.  And so the hundreds of casualties continued to pour in …

Matron Ida Greaves RRC and her sister Staff Nurse Susan Greaves were both at Wimereux on the Channel coast with No 32 Stationary Hospital formerly the Australian Voluntary Hospital (AVH) – that very day taken over by the British army in consequence of the gradual decline in donations that had supported the AVH thus far.  This was not a reflection on the performance of the hospital which had been in the field since late August 1914, rather a result of the proliferation of organisations such as battalion comfort funds, the Girls Patriotic Leagues, the Australian branch of the Red Cross and numerous others that were all vying for funding.

On this day seventy years ago – 22 April 1946 – Sister Blanche Cresswick, graduate of Newcastle Hospital, member of the Australian Army Nursing Service and recipient of the Royal Red Cross 2nd class died age 70.  This now rather unkempt memorial to her was unveiled on 9 October 1948 in the grounds of what is now Newcastle Private Hospital, in earlier times the New Lambton convalescent home.  In 1926 Sister Cresswick had been appointed the head sister of the newly-opened convalescent home, an off-shoot of Newcastle Hospital.

One hundred years ago in April 1916 Sister Cresswick and other Australian nursing and medical staff were arriving in France from Egypt.  As a nurse with No 1 Australian General Hospital she was sent to Rouen on the Seine where the city’s racecourse had been taken over as the site for Allied base hospitals.  By 29 April the unit was open to receive patients evacuated from the Western Front.  In May 1916 the hospital admitted 751 patients, a relatively small number in comparison with the figures for July when there were 4914 admissions largely  as a result of the Battle of the Somme, with 546 men admitted on 2 July alone.

In 1917 Blanche was moved to a casualty clearing station (CCS), a field hospital much closer to the conflict and well within the danger zone.  Not everyone was able to endure the stress of working in a CCS and there are recorded instances of nurses being evacuated to base on account of shell-shock –  a condition usually associated with the troops.  It was for her service at CCSs that Blanche was awarded the Royal Red Cross.

… a nurse born in Singleton, added to the site today. I discovered Staff Nurse Catherine Doohan when visiting Singleton Library.   Can you add to her story?

… Ida Mary Greaves, graduate of Newcastle Hospital and Matron of the Australian Voluntary Hospital in France, attended an investiture at Buckingham Palace.

Pages of Anzac Memorial Book 1917 in the collection of Newcastle Public Library. Click on image to enlarge.

She and Sydney woman Nora Fletcher who was the Matron of Red Cross hospitals in France were the first Australian women to be awarded the Royal Red Cross 1st Class during the Great War.  According to the Australian War Memorial database of honours and awards only 44 Australian women received this honour during that conflict.  A search of contemporary newspapers on Trove indicates that Matron Greaves’  fame was not confined to her home town.

In 1917 the Returned Services Association featured Ida on the frontispiece of its Anzac Memorial publication. 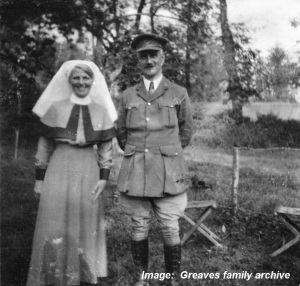 Matron Ida Greaves and an officer. Note the ribbon of the Royal Red Cross on the left side of the cape. This photo was taken at No 7 Casualty Clearing Station, Ligny St Flochel, France on 21 August 1918 when Ida had been in uniform for 4 years. Photo courtesy Greaves family archive. Click on image to enlarge.

I don’t know the answer to that question, although I hope to find out.  What I have recently discovered thanks to the help of a member of the Greaves family, is that Matron Ida Greaves RRC was mentioned in dispatches a third time.  The third MID was documented in a supplement to the London Gazette 10 July 1919, p8788.  Exactly why it was awarded I don’t know, although I suspect that it relates to her service during the evacuation of No 38 Casualty Clearing Station when the German army was advancing in March 1918.   The following is an extract from Matron Greaves’ account of this incident: Next day [23 March 1918] we had patients everywhere & a very fierce bombardment was on. We evacuated patients by ambulance steadily. Colonel Lowe came to me & said the Military Situation seemed to be very serious & said would I tell the Sisters to be prepared to leave at a moment’s notice & to have their train coats etc ready & that we would not be able to take any baggage. He only had one ambulance at his disposal & the O.C. of the adjoining Camp promised to lend him another. There was a fierce bombardment & bombing all night & bombs dropping everywhere. At 5.30 a.m. Colonel Lowe gave an order that we were all to be ready to evacuate in 15 minutes time & could all take one piece of light baggage. [Courtesy Greaves family archive] Casualty Clearing Stations were located close to the front line in order to provide speedy treatment of the wounded.  Nursing and medical staff were non-combatant but were as vulnerable to artillery fire and bombing as anyone else whilst having the responsibility of caring for their patients as well as themselves.

Inside History magazine Nov-Dec issue features an interview on the research behind this website and the publication Sisters of the Valley.  For an online version of the interview, click here.

The Army Medical Services Museum at Keogh Barracks near Aldershot (south west of London) is worth a look – the displays follow the development of medical, nursing and veterinary services from medieval times to the present, with a significant section on the Great War. Interesting to note that army doctors had to fight to be taken seriously at first, just as did nurses later. Take your passport with you, you have to show ID and be signed into the barracks as a visitor!