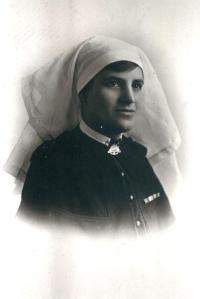 Connection to the Hunter Valley – Sister Minnie Mears ARRC was born at West Maitland and attended West Maitland Public School. She trained at Maitland Hospital and was night sister there before enlisting.  Her sister, Sarah Mears, also served with the AANS.  Minnie was invited to an official welcome home at Oakhampton in 1919.  The five nurses who attended were each presented with a cheque for £30.  Returned nurses were treated with respect and great appreciation by returned men and their communities at the time but were largely forgotten by succeeding generations.

Training and experience – Minnie graduated Maitland Hospital and qualified for membership of the Australian Trained Nurses’ Association in 1913.

Click here to read a letter from Sister Mears thanking a Maitland lady for a parcel of “comforts”.