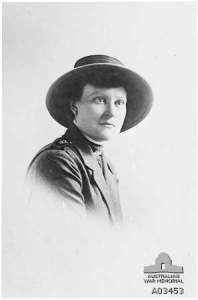 Connection with the Hunter Valley – Sister Sophie Durham was born at Patricks Plains.  She attended Warkworth Public School and is named on the school’s honour roll.  She may have begun her training at Maitland Hospital.

Training and experience – completed her training at Sydney Hospital and may also have worked there subsequently, passed membership  examination for Australian Trained Nurses’ Association  in 1913.

Service location – Hospital ships, Egypt, France, UK. On the hospital ship Gascon at the Dardanelles on 25 April 1915 – for a moving account of the work of the nurses on this ship, read Chapter 2 of Susanna De Vries, Australian Heroines of World War One, Pirgos Press, Brisbane, 2013.  See also “A sightseeing expedition holds up the ship.”

Sophie took a lead role amongst returned nurses on her return to Australia as a member of the founding committee of the NSW nurses’ branch of the Returned Soldiers’ and Sailors’ League. (Sydney Morning Herald,19 December 1928, p.6, retrieved from Trove 10 August 2010).  She was awarded the MBE in 1941 for “social welfare services in the Commonwealth of Australia”.