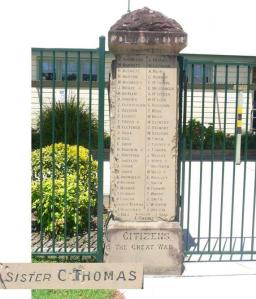 Left side of memorial gates, Pelaw Main Public School, and detail. Catherine’s name appears third from the end in left column.  Click on image to enlarge.
Photo: A John Bramble 2010

Service location – Fremantle Quarantine Station.  Catherine had been destined for Salonika, but her transport, the Wyreema, was recalled at sea because an armistice had been signed.  She disembarked in Western Australia and nursed casualties of the great influenza epidemic.

National Archives of Australia B2455 THOMAS C B