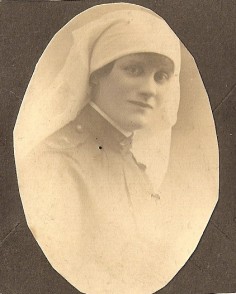 Connection to the Hunter Valley – Staff Nurse Mabel Wood was born in Minmi; her father was licensee of the Station Hotel Kurri Kurri during the War years.

Training and experience – believed to have trained at a private hospital in the Potts Point area, Sydney, qualified for membership of the Australian Trained Nurses’ Association in 1915.

Younger relatives relate the story of Mabel, one of eleven girls, telling her father that she was joining the AANS because the family had no boys to send to war.  Mabel returned to Australia briefly but went back to England in 1920 to marry the British army doctor – Dr John McInnes – who had treated her for malaria.  Malaria was very common amongst the women who were sent to Salonika